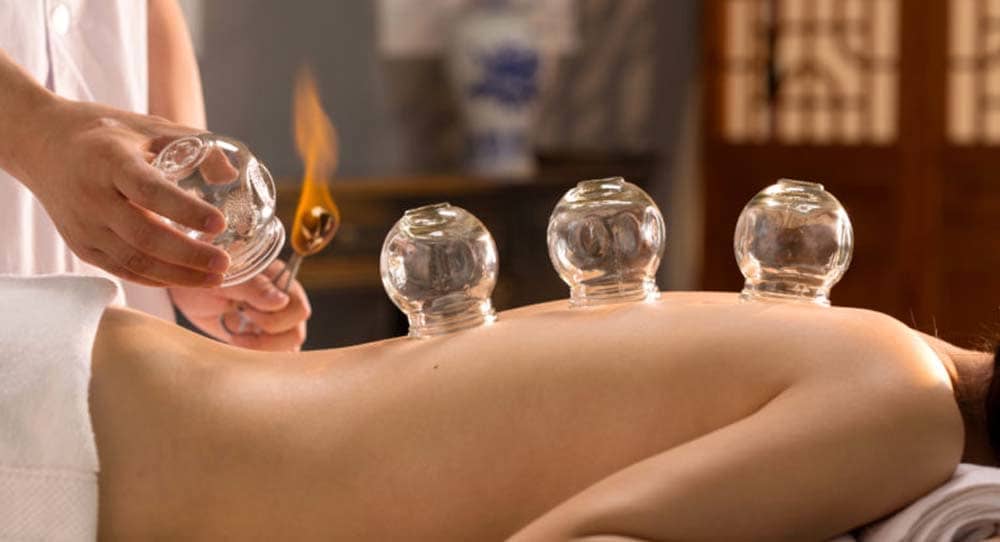 Cupping is a type of Chinese massage, which consists of traditional chinese medicine physicians placing several glass “cups” (open spheres) on the body. Cupping works on the body’s meridian system, to “open up” any stagnant points for a better flow of Qi, and to rejuvenate certain meridians and organs that are not functioning at their optimum. Scientifically, this technique is known to help activate the lymphatic system, promote blood circulation and aid deep tissue repair.

There are two approaches to this, the traditional “fire cupping” where a fire source/match is lit and placed inside the cup and then removed before placing the cup against the skin. As the air in the cup is heated, it expands, and after placing in the skin, cools, creating lower pressure inside the cup that allows the cup to stick to the skin via suction. When combined with massage oil, the cups can be slid around the back, offering “reverse-pressure massage”.

The more modern and safer approach that we prefer to use is using a pump mechanism to cause the suctioning effect. This provides a more even, consistent and controlled suction pressure and virtually no heat (means that it is safer), but retaining all the benefits of cupping therapy.

Wherever and whenever the traditional Chinese medicine practitioner can, the cups will be moved whilst the suction on the skin is still on / active. What this does is that it causes a regional “pull” of the skin and muscles (also known as glide-cupping or gliding-cupping), which helps to restart the Qi (bodily energy) within the individual. The restarting of Qi increases one’s internal energy levels and flow, increasing alertness, focus, strength and even boosting immunity